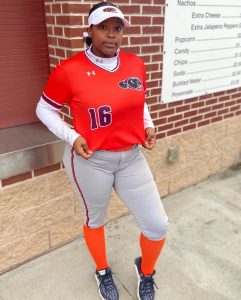 At 7 years old, in 2008, l started playing softball. In 2011, I played my first season in the Natasha Watley League. My memories league are how excited I was to play and be around Natasha, and ask questions whenever I needed to from someone who stood in the shoes that I wanted to be in.

I started my travelball journey at age 13 where I played for the SoCal Patriots. After that, I started playing for SoCal Outlaws and I have been playing for this organization ever since.

Next, I started playing high softball at View Park High School. Winning the championship 3-times in a row took a lot of dedication and drive. But the moments of winning and the atmosphere it created are memories and feelings I will always cherish and appreciate. 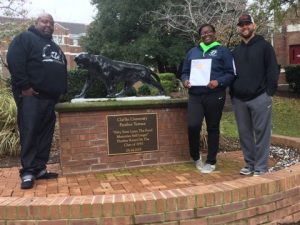 Receiving a college scholarship for softball was my proudest moment. It was the kick off to the start of me fulfilling my dreams. It means that I can create the life that I’ve wanted for myself and that all my hard work finally paid off. The journey was difficult but it brought many opportunities and people in my life that I will forever be grateful for. I met my pitching mentor and idol Tatyana McElroy and built a very strong relationship with her. She taught me many things about softball, as a person, and the power of giving back as I experienced in NWF.

Practice and games are what made me become the player that I am, and my abilities would have never reached the level of a champion without the impact of the Natasha Watley League.