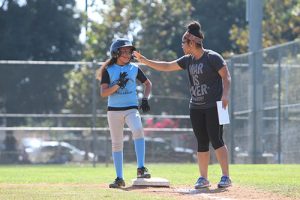 Loren Williams has been coaching with the NWF since 2014, after graduating from college. From coaching in NWF, Loren has learned about the complexity of dealing with kids from diverse backgrounds, many of whom might not have other positive influences. According to Loren, “it’s not always just about softball, it’s more so about the girls, they’re kids, they have trouble in school, they have troubles at home, and them coming out on the field is 9 times out of 10 is like a release. They can come out and get out any frustrations.”

One of the most important lessons Loren learned as a NWF coach was that often as an adult in charge, “we can’t even get to the technical softball skills unless they can actually feel like they can trust you and talk to you and they know that it’s more than just softball.” Winning the game is not the whole story, but letting girls grow as individuals is an equally important part of the process; which is what keeps Loren, and many of the other NWF Coaches coming back each summer.

From this 4th year of coaching, Loren’s biggest inspiration has been the idea that it’s never too late: “There is always another kid that you can reach, someone’s life you can change.” Teaching girls to learn to accept outcomes, move forward, and at the end of the games to go down the line and high-five the other team with the same respect you would want if you were in their shoes has been a lasting takeaway in 2017. Loren’s experience on the field coaching girls is also something she’s able to apply to her own life, taking listening skills and adaptability into any new work situation.

For 2018, Loren is a school office manager for Magnolia Science Academy in Santa Ana, CA, using the mentorship skills she gained with NWF and hopes to coach young women again soon!