The NWF is not just about softball, it also is about family. Below are just two of the countless stories that have become memories to new and returning players and have become part of the experience-based skills that NWF coaches develop with their girls.

Liyah Ferris was the 2013, 4 Points of The Diamond Essay Winner. She started at MLK Park playing softball for the first time with the Natasha Watley League at nine years old.

In Liyah’s own words: “I was a beginner, so I didn’t really know what to do but I got catching and throwing down quickly. And then I decided to learn pitching and catching and that’s where it really made me love the sport more.”

During her time with the NWF, Liyah had a coach mentor who was a college Junior at Cal State Fullerton. Liyah’s Dad became involved in helping coach pitching and catching skills. As a result of the family involvement, Liyah has continued to play softball at MLK Park with the Lady Dodgers and envisions herself playing in high school and dreams about playing softball in college (ideally, at Natasha’s Alma Mater UCLA or Oregon).

Liyah’s younger sister, Imani, has become involved in the program as well after seeing her older sister’s love of the game develop. That has kept the whole family involved; even traveling with Chicago with the NWF to Natasha’s National Professional Championship Game as her guests. 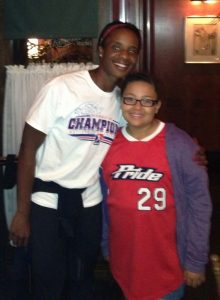 More than the trips and games though, the Ferris sisters are benefiting from the mentorship of powerful women leaders. Bobbie Ferris explained the “it’s very big, I mean there’s so many things that women can do, and they just need to see other women be able to do it. When they see it that builds them enough confidence to go out there on their own…there are a lot of lessons that the coach mentors were able to imprint on the girls. [W]hen it comes to responsibility its huge and just taking pride in everything that they do.”