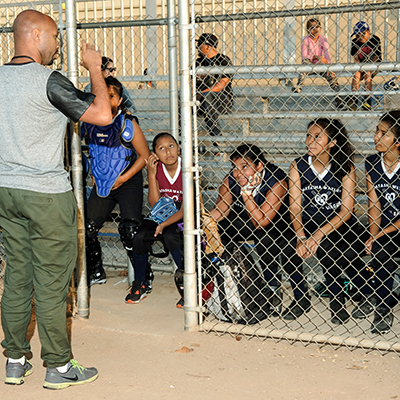 This month, we’re spotlighting some of the amazing coaches who help bring softball teams together. Coaches are integral to the success of a team; their guidance, leadership, and expertise help shape the players and their strategies. Remember to thank your coaches for their hard work and dedication the next time you see them!

First at bat is Sue Enquist, one of the few people in NCAA softball history to win a championship as both a player AND a coach!

Sue played for UCLA from 1975 – 1978, where she led the team to its first national softball championship at the 1978 Women’s College World Series. After playing several more years with the Connecticut Brakettes and graduating with a degree in kinesiology, she worked her way up through the coaching team at UCLA, ultimately becoming the head coach in 1997. Her team, which included Natasha Watley from 2000 – 2003, won 10 national championships during her reign, and she currently has the highest career winning percentage of any college softball coach. Her winning ways were rewarded with multiple National Coach of the Year and Pac-10 Coach of the Year awards, not to mention inductions into the International Women’s Sports Hall of Fame, the National Fastpitch Coaches Association Hall of Fame, the UCLA Hall of Fame, and the Capistrano Unified School District Hall of Fame.

Sue retired in 2006 and is now a consultant and motivational speaker.

Now that we’ve extolled the UCLA Bruins, let’s move on to their rivals, the University of Arizona Wildcats, and their current stellar head coach, Mike Candrea. He’s coached at Arizona since 1986, where he racked up more than 1500 NCAA wins and 9 Pac-10 Conference titles. Under his leadership, the Wildcats have won 8 Women’s College World Series titles. Not only does he coach at the college level, Mike also coached on a worldwide scale at the Olympics, where he led Team USA to a gold medal in 2004 and a silver medal in 2008!

A member of the National Fastpitch Coaches Association Hall of Fame, Mike’s contract at Arizona was recently extended through 2022, so he’s got a lot more coaching (and winning!) to do.

Patty Gasso played softball at California State University Long Beach, and then began her coaching career at Long Beach City College. In 1995, she started coaching at the University of Oklahoma. Her teams have gone to the World Series nine times; they took home the title four times. Patty was inducted into the National Fastpitch Coaches Association Hall of Fame in 2012.

Last, but certainly not least, we’ll take a look at Tim Walton, current head coach of the University of Florida Gators. In college, Tim played baseball for the Cerritos Falcons before transferring to the University of Oklahoma to play for the Sooners. After winning a College World Series, Tim played for the Philadelphia Phillies minor league team.

Tim worked as an assistant coach for the Sooners softball team for four seasons before moving to Kansas to become head coach of the Wichita State Shockers softball team. In 2006, he began coaching at the University of Florida, leading the softball team to the Women’s College World Series seven times. The Gators won the national title in 2014 and 2015; this up-and-coming program is quickly becoming a new age powerhouse!

Do you have a coach you admire? Tell us about him or her in the comments below!